What’s happening out there? I pray that God has kept you safe and in his care since we last spoke. I’m still holding on as best I can. I was ecstatic when I got Volume 2 of the Feedback issue and read my piece on the front page. That was totally invigorating. Thanks a lot for that. You and your organization are truly a blessing.

I know that you’ve asked for grievances and things of that nature, but everything is done on a kiosk. They’ve gotten rid of “The Paper Trail.” END_OF_DOCUMENT_TOKEN_TO_BE_REPLACED

Hope all is well. Sad to still be writing you from this place. SMH. I pray I don’t get anytime for being in the wrong place at the wrong time but with this court system ya never know. I’m depressed like hell. I don’t understand why I’m going through this? Honestly I’m a good dude, I just made a mistake. I never got in any trouble, I’d rather be at home taking care of my family. I wish the judge could see that it shows who did the (deed). Not me, so why am I charged with it? SMH, I hate 20 minute visits and 10 minute phone calls, man. END_OF_DOCUMENT_TOKEN_TO_BE_REPLACED

I’m sorry about the delay. I would’ve written a response to your letter earlier but I was out of stamps. It seems that once you’ve had funds in your account here (DCDC), you’re only allowed to use NF (no funds) on your envelope after a number of days has passed.

I did receive the (book) and pamphlets that were also included. Thank you so much. I really appreciate what your organization does on our behalf. We enjoyed the peaceful protest that took place outside of the DCDC after the Trayvon Martin case. That was really awesome to watch from our cell windows. 🙂 Now, if only these guys would come together for change(s) in this place. END_OF_DOCUMENT_TOKEN_TO_BE_REPLACED

The following is from a spanish-speaking prisoner. He and others are getting jerked around by the system because of status. Translation follows.

As Lee writes, the pencil ban inside of cells and the dearth of pencils available to inmates during rec time affect the ability of inmates to communicate with people outside the jail.

What’s good? It’s always good to know that there’s someone other than family concerned about you. Sorry for the delay: I should’ve written back days ago but, there is a shortage of pencils in this place. I’m sure you’ve heard. END_OF_DOCUMENT_TOKEN_TO_BE_REPLACED

I am E. G. I am 17 years old and a Hispanic male. I  think it’s about time the people know what it is really like in Durham County Jail! This shit is ridiculous. END_OF_DOCUMENT_TOKEN_TO_BE_REPLACED

In the first of two parts, Alonzo, formerly at Durham jail and now incarcerated and in solitary confinement elsewhere in NC, drops some real knowledge. According to him, revolutionary struggle is not for the faint of heart, and it’s not for those who would give up easily.

Hi soldier. How is you allowing life, and its obstacles, to treat you? Hopefully you’re focusing and acting upon a structural objective, taking into account the possibilities of external matter, that can and so often is out of our hands.

Any great soldier realizes that there’s a balance to maintain–Yes!–the Ying and the Yang. Physical, spiritual and mental must be combined in harmony for a magnetic force. END_OF_DOCUMENT_TOKEN_TO_BE_REPLACED

Leonard writes more on art and resistance and expounds upon the Illuminati. It is clear this notion has a good deal of traction among many people and, as this fine piece makes the point, those who dismiss or disparage this idea do so at their peril.

As always, you’re welcome for the drawings! Yeah, I’m good but like I said that’s nothing! I plan to send real art in my next letter…You know that’s exactly what I love to do is draw real people! It’s a real rush of joy to actually watch a person come to life!

Oh, yeah the new toilets are nothing but a maintenance thing if you ask me. I hear they’re doing the new toilets to spend less on maintenance spending. The attitudes with the guards have not changed. Yeah, I really haven’t seen any real changes around here. Oh, yeah, we do have this new calling system now. When you make calls you only say your name one time and it’s recorded with your jail number and password so they know it’s you making the call. Just another way for Big Brother to invade your privacy!

Now you asked me about the “Illuminati.” That’s a whole ‘nother world brother. It’s so deep and real that what their about sound straight outta a movie or evil comic book, but it’s real! Now the Illuminati is a very powerful elite group that’s controlled by the elite family bankers of the world. 13 bloodlines such as Rothschilds & Rockefellers and many more. But it’s bigger. END_OF_DOCUMENT_TOKEN_TO_BE_REPLACED

P. Leonard talks about art, indefinite detention, struggle on the inside and outside, and his favorite jail food: The Swole, a mixture of ramen noodles and chips (often doritos or cheetos), ‘swoled’ together with hot water and wrapped up in a tortilla. As it is a necessity to find something more edible than mess to eat, inmates have come up with the swole. It is often one of the first things taught to a new inmate, and the making of swoles often involves much cooperation and a pooling of resources.

I’m shocked at how fast you wrote back–Thank God! …I turned myself in cause I had nothing to hid. But I didn’t know I would have to sit this long by doing so! Please feel free to put my words and art on display. We need people to read the untold truth about this place! Yes, I’ve been here 18 months. And guess what? I just had court the 24th finally after 7 months of no court date! But I believe there’s a light in the end of the tunnel! My attorney told me they’re trying to give me as much time credit as possible. He said nothing about any time they said I’ll be facing. And they had to talk in hushed tones to Judge Hudson. So I could be coming out time served! I just have to keep praying. Yes, I agree about the justice system and the bigger one that controls them. To me they’re no different than the Illuminati if you ask me. Lol. Well you see some of us in here are down to protest but the others don’t think it will change anything! It makes me mad cause they will be disobedient to the guards on their terms but not protest for the good!

END_OF_DOCUMENT_TOKEN_TO_BE_REPLACED

The following letter comes from Floyd. It was written the day after 3 Durham police officers (from left below: Stacy Armstrong, Ryan Freeman, and Erin Espinola) were arrested for wrongful imprisonment and entering a dwelling unlawfully, but the letter was misplaced until now. One can imagine the inmates looking at News 11 and shaking their heads at the hypocrisy. Not surprisingly, Floyd asks some very poignant questions. As he and others are detained indefinitely under excessive bonds, these three rogues are running free. 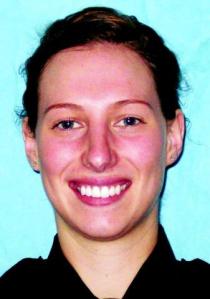 Hope this letter finds you in good health and well being. I know you heard of the 3 police officers on the news (11) for charges of wrongful imprisonment, assault and something else. HMMM!
What’s so bad about it, first they’re still on the force, probably with pay, even though they’ve been charged. They didn’t spend one dime or a foot in jail. Now you tell me, how is their crime different than any of the crimes we’re charged with? And why aren’t they behind bars? Are they above the law? Are they what you call innocent until proven otherwise? So, in my situation of self-defense, bond set at $500,000, defending myself against 4 (people), I’m guilty until proven guilty and sent to jail. By the way, I turned myself in. (Law-abiding citizen, I thought) That was a joke (not funny), I’m upset cause I’ve been here now 112 days and still have not spoken to my lawyer. Anyway these so called officers go free, not to jail, where they belong. END_OF_DOCUMENT_TOKEN_TO_BE_REPLACED