Unity is a Must

“To conquer you must divide.” I believe the first time I quoted that my focus was only aimed at Afro-Americans. For that narrow-mindedness, I give my sincere apologies. Although my ideology was correct, it wasn’t socially correct. By me only focusing on the Afro-Americans, I’ve isolated my views on the mass struggle. In reality, I should have known better for the simple fact that the oppression and repression applied by this capitalist nation has no limitations. I should have grasped the full picture of oneness and of unity. My mind has taken the trip to Mecca, and I have realized and understand that the struggle knows no boundaries and by us fighting a well-organized system separately, we’ve already lost the war.

Every human has the potential to be humane and help his fellow brothers and sisters! This is what I believe, and without this belief the class struggle as a whole cannot survive. We will wither away and be destroyed because of the simple fact that we’re not coming together as a whole. Yes, I understand that every race has its own individual problems and internal affairs. But think, can any of these issues be solved collectively? Yes. Because, as the saying goes, “Two heads are better than one.” So no matter what race, as long s you notice the issue at hand, sympathize with the issue and those affected by the issue and organize around said issue and mobilize against it in a revolutionary fashion, than you’re a comrade and you’re a part of the struggle. It breaks down to this. Either you’re part of the problem or you’re part of the solution.

As Che Guevara said, “Revolutionaries are guided by true feelings of love.” He wasn’t talking about individual love, no. He said, “Individuality is weak in the face of the human conglomerate!” Let’s take a look at some examples of how he had a love for all those in the struggle: Che was an Argentinian who helped fight alongside and liberate Cuba. He also went and fought in the liberation efforts in the Congo and in Bolivia. Che was a true revolutionary, that noticed nothing except the struggle against imperialism. It’s a fact that in revolution people are not just people anymore. Each person, each race, each gender, each religion, and each organization represents a place in the overall grand scheme of things. The powers-that-be realize that if all the oppressed people—white, black, brown, red, yellow—unite as one we will outnumber, overpower and overthrow them.

Why? Why do we not see this? Because they don’t want us to. You see, when Malcolm realized this in Mecca, they offed him! When Che attempted to lend a hand in the international struggle against imperialism, they offed him! When Martin Luther King, Jr. offered his voice and leadership against the war in Vietnam (and for striking sanitation workers), they offed him! Don’t you see? We must stand firm together, be receptive towards each other, organize and fight with one another! If not, attempting to do a revolutionary path separate is nothing short of suicidal. 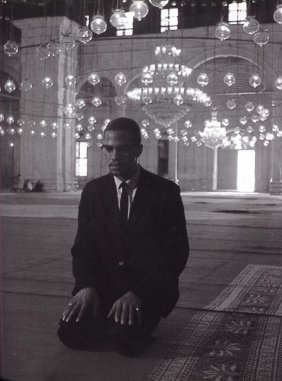 We’ve got to sit down and think, sit down and talk amongst each other, sit down and learn about and from each other. Because when the capitalists catch wind and the repression comes down harder they will not discriminate. It will be easier for them if we continue to see color, we will be helping them do their job if we don’t identify and unify our struggles and join together as one. They will cut our fingers off one by one! But put them together and they’ll be fighting a unified, educated, disciplined and organized force! So, what do you say?

~Either we will all be saved, or we will sink. –Fidel Castro

~They can kill a lot, but they cannot kill us all. –Huey P. Newton

~United we stand, divided we fall~

~Liberation for us ALL~