Ashley Canady attended the McDougald Terrace Resident Council Crime Task Force meeting Wednesday March 16, as she does nearly every month. Usually they are held downtown, but this month it was held in the neighborhood. Task Force meetings are attended by residents, Durham Housing Authority Resident Safety staff, and different city and county law enforcement representatives. Ashley, who was the girlfriend of Matthew McCain and has been outspoken and unrelenting in her demands for answers regarding his death at the jail in January, had her and Matthew’s three month old daughter, Kinslee, in tow at the meeting. The meeting was about to have one more attendee, Sheriff Mike Andrews, but he saw Ashley and Kinslee and made a bee line to the exit. “He was coming in with the (acting) police chief and several other people,” she says of the Durham sheriff, who is responsible for all operations at the Durham County Detention Facility. “He was looking all buttery and happy, and then he saw me and Kinslee and he disappeared like a ghost.” This is not news that will be reported in newspapers or on TV, but it speaks volumes, not only about Andrews himself but his whole office.  “He’s afraid,” Ashley says. “He won’t look at me because I said ‘walk in Kinslee’s shoes for a day’ and I’ve demanded answers about Matt’s death.” 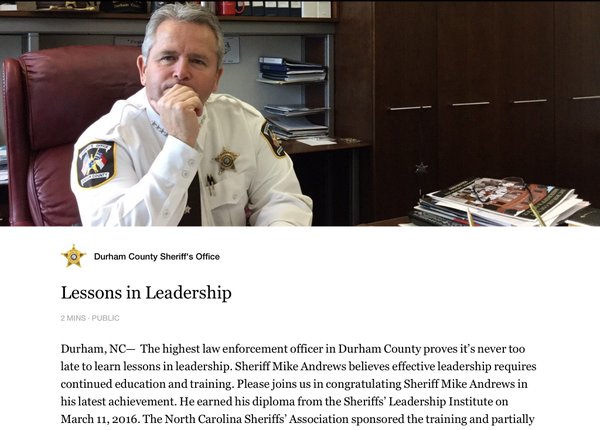 Being a leader means…never being accountable?