In the first of two parts, Alonzo, formerly at Durham jail and now incarcerated and in solitary confinement elsewhere in NC, drops some real knowledge. According to him, revolutionary struggle is not for the faint of heart, and it’s not for those who would give up easily.

Hi soldier. How is you allowing life, and its obstacles, to treat you? Hopefully you’re focusing and acting upon a structural objective, taking into account the possibilities of external matter, that can and so often is out of our hands.

Any great soldier realizes that there’s a balance to maintain–Yes!–the Ying and the Yang. Physical, spiritual and mental must be combined in harmony for a magnetic force.

Many shall come, but only a few shall be accepted and those rejected reject themselves and realize it not! The difference between the chosen, and the lost (w/out direction): the diamond and the crushed coal.

I was reading the other day in the News & Observer a statement President Barack Obama made with regard to the statue of Rosa Parks–the Honorable Rosa Parks–being placed in the capitol. “We make excuses for inaction,” Obama said. “We say to ourselves, ‘It’s not my responsibility. There’s nothing I can do.’ Rosa Parks tells us there’s always something we can do.” Yes! Always!! For better or worse. Was it Frederick Douglass who said, Without struggle, there’ll be no change–or No change without struggle?

Without the civil rights activists, forerunners of yesterday and today, Obama would not be where he is today–at least not at this time.

But I believe that it’s not just about political economic power, and who and what nation a people are from; it’s about inner substance, inner positive and balanced values, morals, and righteous consciousness. Black consciousness!

Black isn’t a skin color, or texture, because one can be black skinned with a white soul, or white skin with a black consciousness.

Black consciousness is a state of mind!

Check out the book by Steve Biko I Write What I Like. 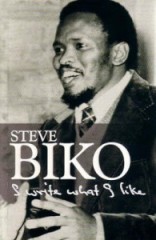 Having power, prestige, authority and dominance, without equality and righteousness is destruction waiting to happen, and tyrants and discrimination undercover, before it’ll become full-fledged outblown oppression inter-alia. You know the drill and history.

Therefore, there are many fronts that have faces, but no inner righteous core; they have no lasting structure, no real purpose, and only temporarily they exist. A front based and grounded upon truth and equality lasts forever, and all can identify with it.

We have all types of racists: black, brown, red, yellow and white. They (the racist) is a parasite, and does not admire discipline, unity, structure, equality, love, truth and justice. That’s the characteristic of a devil (curse him).