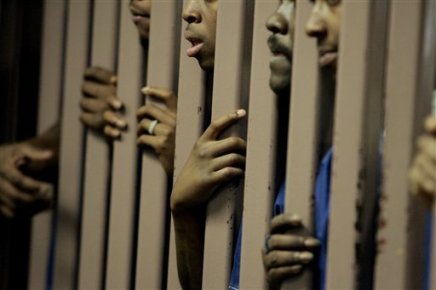 Note: The following short story was written by DCDC inmate Floyd Harwell. This slice of creative writing illuminates deeper truths about the systemic racism of the prison-industrial complex and the human lives that are caught up in the entrails of this system.

THE STORY OF THE PLAN
by Floyd K. Harwell

“I gotta admit, it’s a stroke of pure genius,” says Wilbur.
“What is?” says Oscar stupidly.
“The plan,” says Wilbur.
“Oh yeah, he hit a bullseye with that one.” Oscar smacks his leg laughing.
“He surely did, yes indeed,” says Wilbur, nodding his head convincingly. “Who ever thought it was that simple.”
“Yeah” says Oscar, snickering.
“Old Grand Dragon put that one gun in the hand of that black buck, and I never seen anything so sneaky in all of my days,” says a happy Wilbur.
“Justa looka the way they’re killing each other and we’re not even to blame,” Oscar says.
“Free and clear, just reading about it makes you leap for joy everyday,” grins Wilbur.
“They don’t have a clue.” Oscar barely stifles a chuckle.
“Not a clue.” Wilbur winks and shows Oscar that day’s paper.
Suddenly a shocking look comes across Wilbur’s face. “Oh, oh, damn it!” he yells angrily.
“What? What?!?” says Oscar, looking puzzled.
“Seems we got a problem here,” Wilbur frowns. “This here article says a group of blacks are forming themselves together and they’re calling themselves Amplified Voices,” Wilbur reads. Suddenly he yells and curses all of heaven.
“I’ll be damned, they’re trying to expose the plan.”
“Yea don’t say,” Oscar says, leaning over and grabbing the paper from Wilbur. “Seems this ampli, ampli…”
“AMPLIFIED VOICES!!!!” screams Wilbur.
“Yeah that’s it!” Oscar frowns.
“And it was working to perfection. Now with them people warning folks in the country, our plan the Dragon has, it’s surely to fail now,” says Wilbur.
“Just like the drugs and dope plan is failing,” says Oscar. “Oh man, it says here also that the jail population is taking a drastic drop in America.”
“WHAT!!!” says Wilbur, his hands on his chest.
“Right here.” Oscar reads through the rest of the article. “Those Voice people are being heard and the police and government can’t seem to do anything about it. At this rate is seems like we’re the ones who’s going to become extinct.”
“A minority!!! The Supreme Race, no more.” Wilbur grabs his chest, and in agony, falls over dead.
A shocked Oscar yells “WILBUR! WILBUR!!!”

Seems to me “The Plan” backfired.